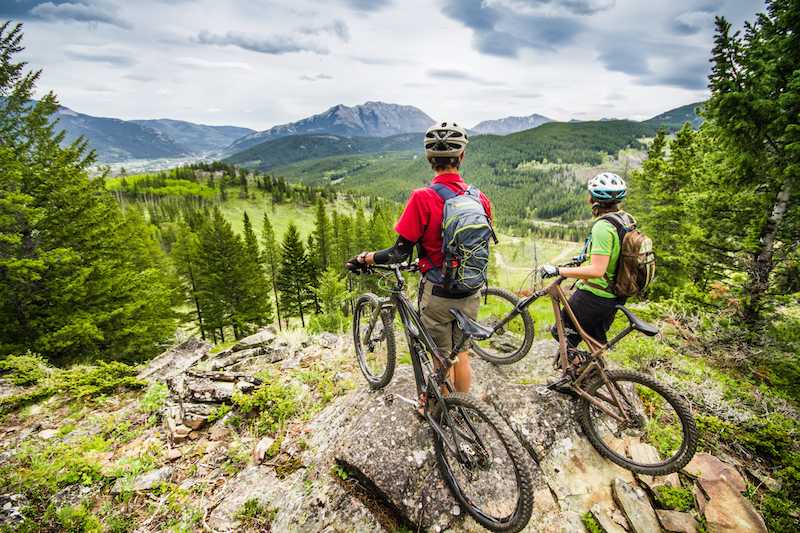 Over the years I’ve learned that the thing that brings me the most joy from mountain biking isn’t the actual riding. Let’s face it: although you do sometimes get a jolt of exhilaration as the wind passes through your hair, the majority of the time pushing those pedals is work!

The ride is a necessary evil. Riding makes beer taste better, it makes a shower an act of resuscitation, and it gives you a topic of conversation as you await a monster serving of tacos and guacamole!

I don’t push my bicycle around for the exercise, I do it for the camaraderie!

What’s the point of tearing it up for six hours if there isn’t anyone to share some margaritas with after the ride? What’s the point of trying for huge air on a jump if you don’t have anyone there to scrape your carcass off the rocks and haul your battered body into the emergency room?

In a world where people are increasingly lame and impossible to endure for more than a few minutes, you can always rely on the cycling crowd to produce some flickers of interesting human interaction.

Over the years, I’ve been involved with starting up several different cycling clubs. Every single time I’ve embarked on that effort, I’ve ended up meeting the kind of friends you don’t have to “unfollow” on Facebook. Everybody always wants to be a part of something, but these clubs don’t spring into existence on their own. Still, with minimal effort you and your buddies can put together a club and then sit back and watch as your cycling lifestyle expands into a whole new level.

To start a club, all you need is one person willing to put in the initial labor. If you have two, that’s even better, but understand from the beginning that there will always be one person who is the primary mover. That person can’t start becoming resentful if they end up doing more work, because one person always ends up doing more work. It’s a fact of life, accept it and move on.

The first step is to ask around and see who is interested in being in a club. Invite your friends out for margaritas, and then propose the following:

“Hey, we all ride together all the time, wouldn’t it be awesome to have matching jerseys and shorts?”

Chances are they’ll all get totally jacked over the idea (wait until they’ve finished at least one drink before you make the pitch). It’s most efficient to have about six people at the beginning. The more you get, the more affordably you can do a print run of jerseys, but in the initial stages it’s more important to get your club started than it is to worry about the number of members. You’ll be surprised how much your club will grow over the years.

Pick somebody to do a design. You can take some suggestions, but one person has to be in charge or else an agreement will never be reached. Also, don’t let the design come down to a vote, because you’ll end up with something nobody likes. You can vote on who will be the design person, but then give that person dictatorial authority.

The person in charge of design doesn’t have to be a graphic designer–places like Mt. Borahand Podiumwear do a wonderful job of transforming a sketch on a napkin into a professional looking piece of clothing. The printers will provide you with suggestions, but remember that ultimately you get to decide how the kit is going to look. You’re paying for it, after all, so don’t be suckered into doing something bland if that’s not what you want.

A nice rendering like this helps bring in sponsors

Once you get a design rendered, you can ask around for some sponsors. The local bike shop probably wouldn’t be opposed to giving your crew a small discount in exchange for having their logo on your uniform. Don’t sneeze at a 10% discount: that adds up to huge savings over time. The more of a connection you have with your local bike shop, the better–this is the absolute best advertising a shop can get.

If you have connections with other businesses, see if they’ll give you a couple hundred bucks to include their logo. A sponsorship is deductible as advertising, and you’d be surprised at how many places are willing to hand out cash. Some of these places might even invite you to ride in a parade or something, which will be awesome.

Chances are you aren’t going to acquire enough sponsors to pay for the jerseys, but you should be able to at least offer them to your members at a reasonable price. Once people start seeing you at races, there will be interest in joining up.

I’ve found that the key to expanding your club is to be open to everybody. Elitist clubs seem to dry up quickly; clubs that provide ample opportunity for post-ride beer drinking for everyone endure over time.

At some point you’re probably going to want a presence on the web and on Facebook, but always make sure you have everybody’s direct contact information. Understand that you will have to tell people the same thing about ten times before you get everyone marching in line. That’s human nature, and in a world of constant distractions, people need a lot of reminders.

If you’ve got a person who can put a blog together, use it as an online watering hole for planning group rides. Your club makes it easy to get people together to car pool to events. Also, the more eyes on the lookout for cool activities, the better. Over the years, my various clubs have introduced me to all kinds of great rides that I never would have encountered otherwise.

Back when I was a pup, I needed no encouragement to pull on my shoes and go out for a couple hour mash session. With every year that gets tacked on, I become more thankful for the effort and support of my local club. There are mornings when you hear the wake-up alarm and don’t want to do anything besides throw the clock through the window. For me, it’s a lot easier to get up and get going when I know my friends are depending on my arrival.

You’ll be surprised at how much more enjoyment you’ll get from your riding if you are part of a local club. Sure it takes work, and though there is the potential for sponsorship, you’ll still spend a bit of money. The gains you’ll make in friendship, however, are priceless.